Professor Susanne Siebentritt, a leading researcher in the field of photovoltaics, is to be awarded the 2015 ‘Grand Prix 2015 en Sciences Physiques’, also known as the ‘Prix Paul Wurth’. The award will be presented at an academic event at the Chamber of Commerce on 14 November 2015.

Based at the University of Luxembourg, where she heads up the University of Luxembourg’s Photovoltaics Laboratory (LPV), Professor Siebentritt is currently working on new materials for solar cells, with a particular focus on the development of new structures and processes for the preparation of thin film solar cells, and the fundamental materials physics of novel semiconductors used as absorbers in these

Professor Siebentritt has received several research grants from the FNR, enabling her to continue her ground-breaking work in photovoltaics, and in 2014 she and her team were presented with an FNR Award for ‘Outstanding Scientific Publications’. devices. 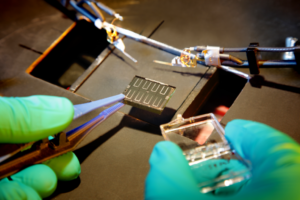 In only 8 years, Professor Siebentritt has successfully created a dedicated photovoltaics laboratory at the University of Luxembourg, and established a team of highly talented researchers, allowing the laboratory to produced world-class research in the field of photovoltaics.

In line with strict regulations, Professor Siebentritt was voted the winner of this year’s prize by a jury comprising of physicists and physics Professors. The jury comprised:

The award will be presented to Professor Siebentritt at a special academic séance, which will be held on Saturday, 14 November, at the Chamber of Commerce in Luxembourg. Interested parties are invited to attend the event, but places are limited and registration is mandatory. The award is sponsored by Paul Wurth, an international engineering company, and awarded by the Institut Grand Ducal.