The University of Luxembourg today announced the publication of a research article in the internationally renowned scientific journal Nature Communications. The article is based on research on the interaction between microorganisms in the gut and the human body through the development of the artificial ‘HuMiX’ model.

The development of the HuMiX model was achieved through support from the FNR’s ATTRACT, CORE, Inter mobility, Accompanying Measures 2c, Proof-of-Concept and AFR funding programmes.

HuMiX, ‘Human-Microbial X(cross)-talk’, represents an ‘organ-on-a-chip’ model for the human gastrointestinal tract. The model is developed to study the interaction between the microbiome, the community of all microbial organisms that live in and on our body, and the human host – all in vitro. The model and resulting insights will allow a better understanding of whether changes in the gut’s microbiome cause disease, or if such changes are a consequence of the disease.

The human microbiome is emerging as a key area of research within which HuMiX is the only model able to replicate the community of microorganisms in the gut while also allowing the study of their impact on human cell physiology. This technological breakthrough has not only the potential to change the way patients are given drugs by pre-screening their effects on patient-derived cells and microbiota outside of the body, but also open up a new market segment for HuMiX in clinical drug development.

Commenting on the article, Prof. Dr. Paul Wilmes, Principal Investigator at Luxembourg Centre for Systems Biomedicine (LCSB) of the University of Luxembourg and senior author on the paper said: “Insights into the function of the human microbiome are key to our understanding of human health and disease. By mimicking its function and the repercussions of distinct microbiota on human cells, we are now able to better understand the gut microbiome and also how it reacts to for example distinct drugs or dietary regimes.”

The key benefit of HuMiX technology is that it can help determine a drug’s suitability in humans and improve their overall success in the drug development pipeline. The model will for the first time allow pre-clinical testing in an environment that is analogous to the human system. Animal models, such as germ-free mice exhibit important limitations with respect to the topology of their gastrointestinal tract, their diet and, importantly, their immune system. As the pharmacokinetics of drugs largely depend on the microbiome, of a 1000 drugs in clinical trials that are tested on mice, only a third are successful due to some of these shortcomings[1].

Dr. Pranjul Shah, now Business Development and Innovation Expert at the LCSB and first author of the study also sees economic potential in the technology and is preparing as Entrepreneur-in-Residence for a spin-off company – OrgaMime. “The human microbiome market is one of the fastest growing niche markets at the interface of therapeutics and diagnostics. With the broad focus of the microbiome industry, even at pessimistic estimates, the industry is expected to reach $658m by 2023[2].

HuMiX is well positioned to be an enabling technology for a range of drug discovery programs at newly founded start-ups, pharma as well as nutraceutical companies. It has the potential to help further understand and consequently aid in the discovery of new treatments for obesity, inflammatory bowel disease, diabetes, cancer, and neurodegenerative diseases.”

The article, ‘’A microfluidics based in vitro model of gastrointestinal human-microbe interface’’, can be found here: DOI: 10.1038/ncomms11535.

This news story is from a press release issued by the University of Luxembourg.

HuMiX currently benefits from funding from the FNR’s PoC Programme, view a teaser with an overview of what the Project Team aims to achieve during the PoC Project (click to enlarge): 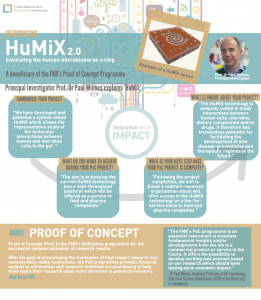