Home | Our News | International Women’s Day 2017: Facts and figures about gender issues in research in Luxembourg

The Luxembourg public research system employs approximately 2870 researchers (full time equivalent = FTE), based on the statistics provided for 2015 by the Government. Around 1 in 4 researchers are female – putting Luxembourg below the EU average of 1 in 3. These statistics stem from the so-called SHE Figures from 2015 – an EU wide publication edited every 3 years with data on female researchers’ participation.

No gender bias in proposal evaluation

FNR figures for 2015 demonstrate that there is no gender bias in its evaluation process: 38% of all proposals submitted to FNR in 2015 stemmed from female applicants vs. 37% of all funded proposals. Also, there is a relatively good gender balance in FNR’s boards, with 55% female members in the governing board and 62% female members in the scientific council. The FNR expert panels are not yet as balanced (19% of 2016 panel members were female), but efforts are made to increase female participation.

As a member of Science Europe, the FNR is committed to a detailed monitoring of gender statistics across its funding schemes. Science Europe has recently published a “Practical Guide do Improving Gender Equality in Research Organisations” including grant management practices that enhance gender equality, a guide which constitutes a benchmark for further FNR action. In fact, the FNR is doing comparatively well in terms of maternity and parental leave, since researchers funded in the framework of FNR’s various schemes all have employment contracts entitling them to the relatively generous Luxembourg maternity and parental leave.

Only 16.5% leading researchers in Luxembourg female

Progressing in the career and moving up the ladder, Luxembourg ranks 2nd last in Europe with only 16.5% of so-called Grade A positions allocated to women (2013), corresponding to full professorships or senior researchers.

It is true that even in countries where support measures to female researchers are strong, there still exists a gender gap for female researchers in higher positions and in engineering and technology domains, but support measures seem to soften this gap, so Luxembourg will need to develop its own measures in the future to address the most severe gender imbalances in the research system.

Currently, the FNR has taken two measures to strengthen female participation within its two recruitment schemes ATTRACT and PEARL, requiring that at least 40% of ATTRACT applicants and at least 30% of PEARL applicants are female for the period 2017-2021. However, the institutions have not yet reacted to this quota: the ATTRACT female submission rate for 2017 was 10% instead of 40%. It seems as if the pressure on institutions to reach this quota has to be increased.

Decline in women in engineering & technology

What is worrying is the fact that Luxembourg is one of only two countries in Europe where the share of female researchers in engineering and technology between 2005 and 2012 has even declined (from 18% to 16%), Finland being the other country where this is the case.

Countries such as the UK and Denmark managed to increase their share of female researchers in engineering and technology from approximately 20% to 40% between 2005 and 2012.

If statistics along the research career are considered, it becomes evident that the strongest imbalances in female participation concern the advanced career stages and leading positions.

In the ‘Lycée classique’ the share of young women in science sections is still nearly balanced (49% female vs 51% male) in Luxembourg.

Drop in female ratio after PhD

Women in science & engineering in Luxembourg

Recently the FNR was co-organiser with the Association Jeunes Scientifiques of the exposition WISE initiated by the City of Luxembourg – showcasing portraits of successful female researchers in Luxembourg. Initiatives of this type are extremely important to lead by example and stimulate change. The exhibition featured a selection of 12 women in science in Luxembourg.

To go along with the exhibition, the FNR published a series of highlights about some of the featured researchers:

To mark International Women’s Day, the FNR has created an infographic that provides an overview about the ratio of female grantees in a selection of FNR programmes: 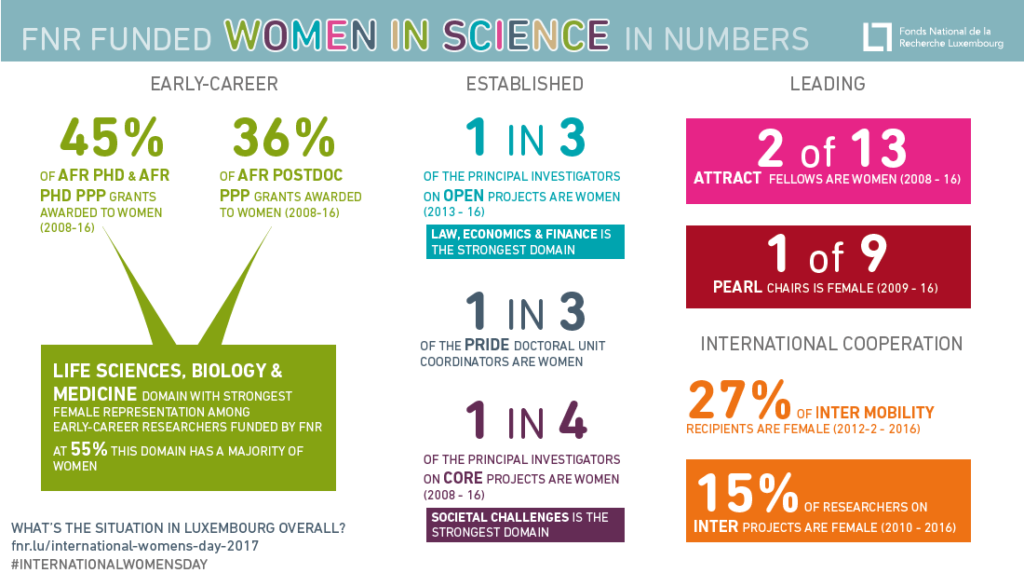 These figures are also available for the 2016 International Women’s Day (click to enlarge):