At the Luxembourg Institute of Science and Technology (LIST), FNR ATTRACT Fellow Dr César Pascual García uses nanotechnology to develop sensors that could one day scan our proteins for diseases. We spoke to the Spanish national about why he will not be tied down to one discipline, where he finds inspiration, and why we are at the edge of the proteomics era.

What is your background?

“I was born and raised in Madrid. When it came to choosing a subject to study at University, I chose physics, because I was good at it in school. After completing my Masters in Madrid, I spent around seven years in Pisa, Italy, where I did my PhD in Solid State Physics and a Postdoc working with Nano devices with metal-superconductor interfaces, before I started working as a Scientific Officer at the European Commission’s Institute for Health and Consumer Protection in Italy.”

What did your role as a Scientific Officer at the European Commission (EC) entail?

“My main responsibility was to provide scientific answers to the EC on aspects related to European policy linked to nanotechnology, such as developing characterisation methods for industry or assessing toxicology. I for example developed new approaches to analyse nanomaterials and study their interactions, and set up the current facilities of electron transmission microscopy and electron and ion scanning microscopy.”

Why did you decide to leave your permanent position at the EC to come to Luxembourg and return to research?

“On one side, it was of interest to me because my wife was already living in Luxembourg, and we were expecting our first child. However, it was also out of professional interest. In the EU Commission, my job was limited, but I had many ideas for things I wanted to develop. I had an idea about how to apply some techniques that are applied to semiconductor technology to chemistry: what if we could have billions of chemical connections happening at the same time using nanotechnology?

“I came to LIST (CRP Gabriel Lippmann at the time) and I presented my project idea. That was the first step. I saw this opportunity to develop the project here in Luxembourg and the FNR ATTRACT Fellowship made it possible.”

“I had an idea about how to apply some techniques that are applied to semiconductor technology to chemistry: what if we could have billions of chemical connections happening at the same time using nanotechnology?”

For your ATTRACT project, you are combining nanotechnology with personalised medicine. Can you go into more detail?

“In personalised medicine you have to take a sample from the patient – you have to understand and compare the cells of a healthy patient with those of a patient with a disease. We don’t yet understand the language of proteins – when we see a sequence of amino acids, we don’t know what they are going to do. We try to look at what is and what is not ok, spotting the differences. The issue here: there are billions of amino-acid sequences from the proteins to compare; therefore finding differences between them is a huge task.”

How are you addressing this issue with your nanotechnology sensors?

“We are making sensors that are aiming to analyse samples coming from healthy and diseased cells. When you go to do a blood analysis, the doctor has a sheet with what they want to check – your cholesterol, antibodies etc. They know what they are looking at. In personalised medicine, by definition, you don’t have that. Instead, the information from your cells would analysed and they would give clues to what is wrong.”

Looking at the big picture – do you see yourself following the sensor all the way to application, or is your focus more on the practical work of developing these types of sensors?

“I am good at some things – such as fabricating using nanotechnology – and not good at other things, for example running a company. I know that because I have seen what it takes. We need to continue advancing, then at the point where we have shown that our sensor works, we will hand it over to someone else.

“I will be happy if it is successful, but I am not interested in the business side of the device. Once it works, we will start something new. I see myself creating a device, perfecting it, then handing it over to be implemented. The goal is always to release something physical so someone else can work with it.”

So your focus is on manufacturing a device that can directly be used to innovate medicine, rather than testing theories in the lab.

“There is theory behind it – such as modelling the sensor and understanding the processes that made it work. But yes – at the end there has to be something physical, a device. People have to see that it works in practice. That is something I like a lot – to fabricate something, see how it works, and fine tune the properties. It’s fun – it’s a bit like having a device made of Lego with motors and switches.”

“It’s fun – it’s a bit like having a device made of Lego with motors and switches.”

What are your thoughts on how fast diagnostics and nanotechnology in health are evolving?

“Time is extremely important in my project, we do not have time for many errors. In molecular diagnostics, there have been huge advances in the last years. We entered the genetic era very fast and now you can easily get a genetic analysis.

“When I came to Luxembourg in 2014, my wife and I had our first child and we did not consider a genetic test. We knew they exist, but they were expensive. Our second child came 18 months later. At the beginning of the pregnancy, the doctors were considering a genetic test, but it was still something that had to be done abroad. By the end of the pregnancy, this test was much more readily available and as a result the price had decreased significantly.

“I think we are the edge of a new era now: the proteomics era, which is all about the study of proteins on a large scale. There are still a lot of challenges, and we think we can contribute. We are at a position in time where what we are creating is needed, we have a market of applications.”

“I think we are the edge of a new era now: the proteomics era, which is all about the study of proteins on a large scale. There are still a lot of challenges, and we think we can contribute. We are at a position in time where what we are creating is needed, we have a market of applications.”

Did you experience any challenges getting started, seeing as your project was in a field somewhat new to you?

“Everything was new! During the first year, I was asking myself ‘can I do this?’, during the second year it switched to ‘it doesn’t matter, I have to do this’, and then by the third year everything started running a bit more smoothly.

“Getting fellow scientists to collaborate on the project was also tough, at first. When I started contacting the people who are now collaborating with us, it was always a surprise for them. I called and said as someone new in the field, I would like someone to look over my shoulder and tell me if I’m going in the right direction. The first of these conversations were not easy – but now we have strong collaborations with around 20 researchers, for example in the Netherlands and Denmark.”

Your background is multidisciplinary; you have worked in several fields related to physics. What would you say is the common thread?

“Yes, I have developed skills in areas including Thin Films, Materials Science, Nanomaterials, Spectroscopy, and Scanning Electron Microscopy – but the common thread in my career is that I know how to fabricate things with nanotechnology. I think I’m a varied scientist – I don’t have one topic that I am following: I did my PhD on one topic, then I did a Postdoc on something very different and then I started my position at the European Commission, which again involved other topics. My ATTRACT, again, is on a different topic entirely. It has been a challenge, but I am very happy and I am pleased with where my decisions have led me.”

Where do you find inspiration?

“My main source of inspiration comes from talking to people, even though I am an introvert. I have very good friends, and I learn a lot from them. I also get along well with other researchers, such as Phil Dale and Stan Schymanski (also FNR ATTRACT Fellows) – we often meet, and enjoy talking. It’s beyond having a common project. We cross paths and try to have creative lunches together every once in a while. Luxembourg, due to its size, means you are naturally exposed to researchers in other fields. This brings opportunities you do not have in other countries.”

“Everything was new! During the first year, I was asking myself ‘can I do this?’, during the second year it switched to ‘it doesn’t matter, I have to do this’, and then by the third year everything started running a bit more smoothly. 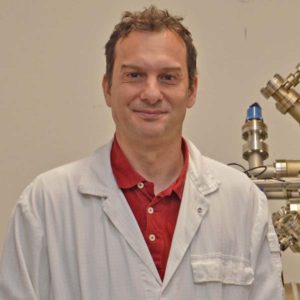