FNR ATTRACT Fellows – the people behind the science: Andreas Michels

After stays in Germany, Switzerland and Australia, physicist Prof Dr Andreas Michels found himself moving to Luxembourg in 2010, with an FNR ATTRACT Fellowship in his pocket. 8 years on, we spoke to the German/Luxembourgish national about his research group’s work to get a ‘behind the scenes’ look at materials, why they get to travel the world for their experiments, and his thoughts on the development of research in Luxembourg.

What was your research journey in the lead up to coming to Luxembourg as an FNR ATTRACT Fellow?

“When I completed that in 2008, I applied for jobs all over Europe, when a friend of mine made me aware of the FNR’s ATTRACT programme. I applied and it worked out – I came to Luxembourg in March 2010. I have to admit it’s a coincidence I ended up in Luxembourg – before I found out about the ATTRACT programme and started looking into Luxembourg, I was not even aware there was a university here – at the time, it did not have the international reputation it has now.”

After years of moving around between countries and institutions, it must have been nice to be able to secure the 5-year funding that comes with the ATTRACT programme.

“Yes. Of course, when I was younger it was nice to move around and see different places, but at some point, you want to enter a steady state. Continuity and access to your own research funds, which the ATTRACT Fellowship provided me with, is also important if you want to build your own research programme.”

When you came to Luxembourg, you created the research group NanoMagnetism, which sits within the Physics and Materials Science Research Unit at the University of Luxembourg. Can you summarise what you work on with your group?

“Our work revolves around neutron scattering – a method with which you can see inside materials, such as metals, ceramics, steel, polymers, and liquids. With help of the neutrons, we can learn about the structure of materials, for example where the atoms and particles sit. We can also learn about the dynamics of the materials, for example how and how fast the atoms move, and whether they move in harmony or not. All of this can be learned by ‘shooting’ neutrons – very similar to how an x-ray helps a doctor see what is going on inside a patient.”

“Of course, when I was younger it was nice to move around and see different places, but at some point, you want to enter a steady state.”

What are you trying to achieve by getting this ‘behind the scenes’ view of materials?

“We are trying to understand how these materials work. We use one small angle neutron scattering technique in particular, where you have access to a certain length scale: the mesoscopic length scale. It covers a scale from a few nanometers – roughly the size of a strand of human DNA – to a few hundred nanometers – about one hundredth of the width of a human hair. It’s important for us to use this scale, as its where many of the materials properties we look at can be found.”

“Our focus is to understand how neutrons are scattered by magnetic materials on that length scale. To accomplish this, we do analytical theory, experimental work, and together with collaborators in Germany we also do computer simulations. Our overall aim is the theoretical and experimental development of the technique of magnetic small angle neutron scattering.”

Can you explain more about why your experiments take place abroad?

“When you produce neutrons, some radioactivity is involved, so they need to be produced in large-scale facilities. Worldwide there are maybe 20-30 large-scale facilities like these. We mainly go to the FRMII reactor at the Technical University in Munich, or the Paul Scherrer Institute Switzerland, or to the Institut Laue-Langevin in Grenoble. We have also been to the research reactor in Australia. We normally go where we can get ‘beamtime’, the word used to describe the process of shooting the neutrons.”

“You cannot have neutrons in a university lab, so the majority of our experiments take place abroad”

“Yes. The actual experiment only takes a few days, but they generate a large amount of data. Typically we conduct around 5 – 6 experiments per year, which generates enough data to keep us busy – a PhD or Postdoc working on a neutron scattering project, will spend a considerable amount of their project on reducing and analysing the data.”

Are these experiments something you look forward to?

“Sometimes I would like to participate, but time constraints don’t allow it, I normally send my PhD and Postdocs. I teach here at the University – and I’m the Course Director for the Masters course in Physics, which brings with it some administration. In addition, I go to conferences and I’m a member of several committees. Plus, I also have a family after all!”

Your research group in Luxembourg has been active for around 8 years now. Looking back, what stands out to you as highlights in your work?

“There are several, but one that stands out: we have developed the currently accepted theoretical framework for analysing and interpreting the data generated in magnetic small angle neutron scattering. We are currently working on verifying a particular aspect of this theory – it’s a deep hole we are drilling! This framework applies to a very broad class of magnetic materials, including iron, magnetic steel, or Nd-Fe-B magnets.”

What is the biggest question facing your field?

“There will always be questions – that’s the very nature of science! However, I would say one of the biggest challenges that lie ahead of us is to develop theory for the magnetic neutron scattering of nanoparticles. This area is currently only treated with very superficial assumptions, which are not really adapted to the physical reality. I would say developing the theoretical framework for this is going to be the biggest challenge for my field over the next years.”

“There will always be questions – that’s the very nature of science!”

Between teaching, course directing, supervising and research, which of your responsibilities takes up the most of your time, and which do you enjoy the most?

“I am very privileged in the sense that the science is both the part I enjoy most, and the one on which takes up most of my time.”

Do you have any thoughts on how the research in Luxembourg has developed since you got here in 2010?

“I can only really speak for the physics department here at the University, but I have to say it has developed in a positive way. When I came to Luxembourg in 2010, there were 3 – 4 research groups here, but by this summer, it will be 12. That shows the dynamics of how quickly things have developed here. We have recruited very good and internationally known people here in the physics department, who are also fun to work with.”

[1] Habilitation is the highest academic qualification a person can achieve by their own pursuit in certain European and Asian countries. Earned after obtaining a doctorate, the habilitation requires the candidate to write a second dissertation, reviewed by and defended before an academic committee in a process similar to that for the doctoral dissertation. source

“When I came to Luxembourg in 2010, there were 3 – 4 research groups here, but by this summer, it will be 12. That shows the dynamics of how quickly things have developed here.”

Secures FNR ATTRACT Fellowship and moves to Luxembourg to create the research group NanoMagnetism, based at the University of Luxembourg. 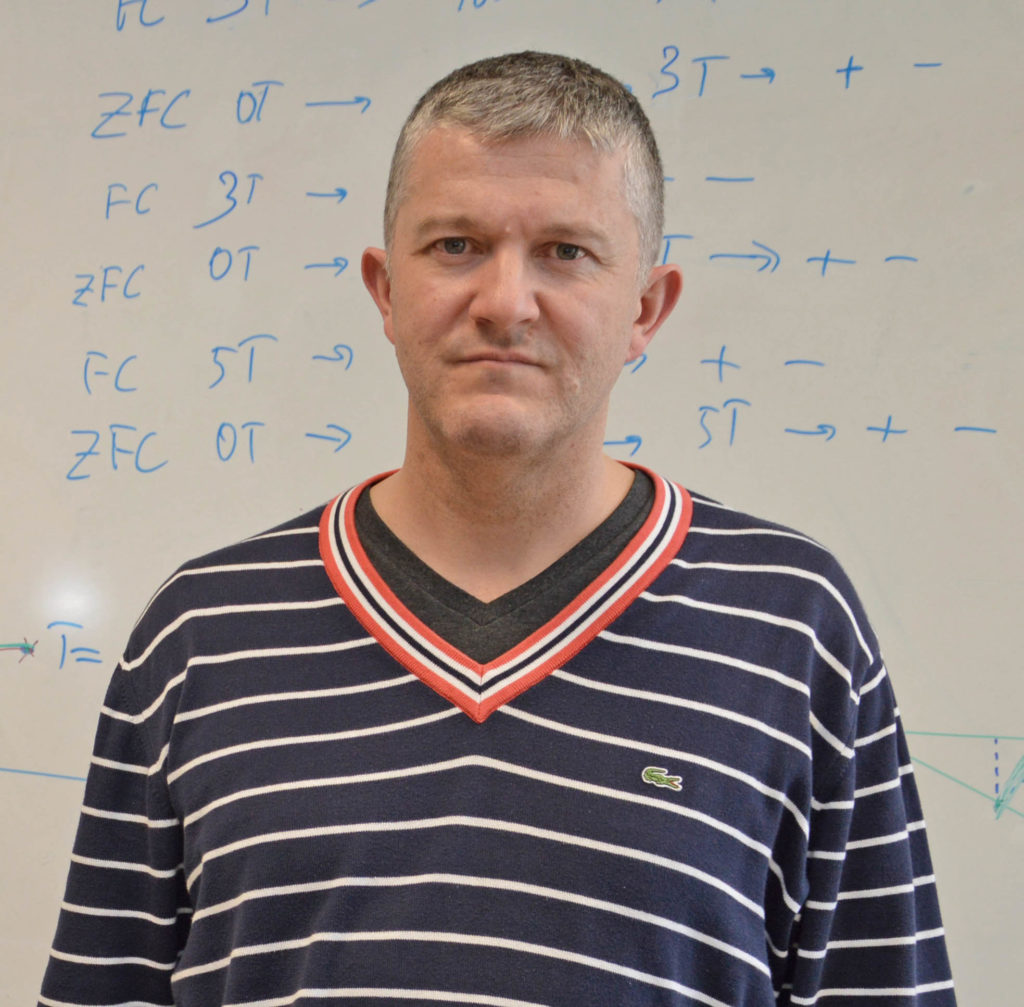 Associate Professor for Physics & Materials at the University of Luxembourg