Dr Alex Redinger, Luxembourg national and experimental physicist embarked on his FNR ATTRACT Fellowship in March 2017 and has big goals: Turning Luxembourg into a European photovoltaics hub. We spoke to Alex about the challenges he expects as he learns to be a mentor, the eternal quest for funding – and why he feels it is his duty to inspire the next generation of physicists in Luxembourg.

Alex, you’re a physicist who, to put it in lay terms, works with solar cells. What do you mean when you say you want to turn Luxembourg into a European photovoltaics hub?

“In 10 years, if you think about solar cell research, Luxembourg should appear in your mind – that is one of the big goals. With a decent critical mass of researchers at the University and at LIST who are experts on solar cells and/or material characterisation, I believe that Luxembourg could become an attractive place for PV related research and development centers in Europe.

“However, this requires that we have expertise in every aspect of solar cell research – from which material is best used to make the cells, to how they can be made more efficient – which we are working on. I hope that I can contribute substantially to the development and shaping of the future research landscape of Luxembourg.”

“I hope that I can contribute substantially to the development and shaping of the future research landscape of Luxembourg.”

So there are several research areas within solar cells and photovoltaics – what is your expertise and what will your ATTRACT project focus on?

“My specific area is surface properties – looking at the ‘characteristics’ of the surface of the materials that are used to make solar cells.

“As part of my ATTRACT project I am going to set up a scanning probe microscopy group at the University of Luxembourg, with the aim to improve the understanding of the surfaces and interfaces of polycrystalline materials that are relevant for photovoltaics. Overall, it is a continuation of the work I carried out during my postdoctoral periods at the University of Luxembourg and at HZB Berlin.

“For the ATTRACT project, I acquired a very advanced machine which makes it possible to look at the surfaces of the materials used for solar cells on an atomic level. Recently, we successfully achieved atomic resolution on a semiconductor surface – for the first time in Luxembourg.”

Getting an FNR ATTRACT Fellowship is quite a step up for most researchers.

“It’s a huge step – and it’s the most essential one. Getting a PhD position is not difficult, and if you do well, finding a Postdoc is not a problem. But then you get older and reach a tipping point where you have to decide if you stay in research or not, which is a stressful time. I started studying in the year 2000 and I never had the prospect of a permanent contract, or a future in an institution – until now, 17 years after I started studying.”

That’s a long time – how has this affected your family?

“There has been a lot of moving around. I did my PhD in Germany, and then I came to Luxembourg for a Postdoc. When the project ended, I left Luxembourg, family in tow, for an AFR Postdoc in Berlin. After my first postdoctoral stay I decided to carry out one more postdoc and then either move up to the next level or quit. I do see that you need to get expertise, and in different labs, but at some point it has to stop, because otherwise you can’t have a family. That is also why I am happy I got this position as FNR ATTRACT Fellow, I hope it will help me sort out a balance.”

“I do see that you need to get expertise, and in different labs, but at some point the moving around has to stop, because otherwise you can’t have a family. “

Speaking of balance, as an FNR ATTRACT Fellow and Associate Professor, you are taking on more responsibilities – are there any of them that are new or that you feel will be challenging?

“What is new to me is that I will be personally responsible for the students in my group – in all aspects. I need to hire them, motivate them without pushing too hard – and find the compromise between looking at everything they do and giving them freedom to come up with their own ideas. I always say: buying a new pump is easy – it breaks, you buy a new one. However, with PhD or Master students it’s different – they are human beings with all aspects. I think becoming a mentor will be the most challenging part and something I have to learn. I have decided to start my group with two PhD students, because I really like working with PhDs.”

In what respect do you like working with PhD candidates?

“Well, even though it’s a lot of work in the beginning, you see them developing very fast. Some of the improvements in solar cells have come from PhD students with a great idea. But still, I would like to have a postdoc or two in the near future and so I will be working on finding more funding.”

You talk about finding more funding already – is the quest for funding never-ending in research?

“An FNR ATTRACT grant gives you a decent and very competitive start, even compared to European funding. But you have to see it like this: My salary is in there, the salary of the students, then there are two machines and then it’s almost gone. I started in March 2017 and almost immediately handed in a proposal. No doubt there will be other proposals in the near future, and in a year or two I will look for ERCs[1]. The question of funding never goes away.”

You took part in the FNR activity Chercheurs à l’école only a few weeks after you started your FNR ATTRACT Fellowship. Is inspiring the next generation of scientists a matter of importance to you?

“Yes – we have got to motivate the next generation. We’d like to have more physics students in our programme at the University, but how do we get there? When I gave my presentation at Chercheurs à l’école, it turned out that a lot of the young people could not understand why one should carry out a PhD thesis, especially abroad, if the salaries are so much lower than in Luxembourg.

“I tried to  convince these students that research is worth it – I think I am a good example: I went through all the steps, studied abroad, did my PhD and my Postdoc, and have now secured a job as an FNR ATTRACT Fellow and Associate Professor – in Luxembourg, as a Luxembourger. I would actually like to have a project where I spend a few weeks per year going to schools and showing students why to study physics and what it looks like in practice. As a researcher, it is so rewarding when you have the feeling that you are working in the right direction – that you can make a contribution that can have a direct impact and help improve the world – and you can do it from Luxembourg.”

Completes PhD in Surface Science at University of Cologne (grade Cumma Sum Laude). Alex had moved to Cologne with his research group from RWTH Aachen. 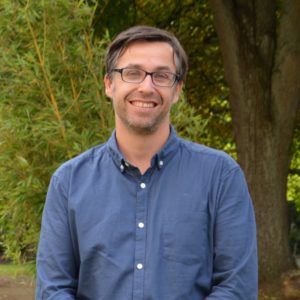