“When we see people with neurological disorders, one can immediately recognise how severe these changes can be. This was always faschinating to me – to find out more about how these disorders develop, how they progress – and how to help the patients suffering from these disorders,” says Prof Dr Michel Mittelbronn, whose aim is to develop better diagnostic and treatment strategies for neurodegenerative disorders and brain tumours. His research is supported by a 2.6 MEUR grant from the FNR’s PEARL programme over five years.

Diseases of the brain are among the most complex neurological disorders of all. They are also especially difficult to diagnose and treat – often the exact disease can only be identified after death. The changes become clear when comparing the brain to a healthy donor brain.

“You see [photo below] in the midbrain that the substantia nigra – the affected area if you have Parkinson’s disease – is dark grey. This is due to the fact that these neurons contain a dark pigment which is called neuromelanin. When Parkinson’s Disease progresses, you see that this area becomes pale or almost white, because these neurons are dying and therefore the pigment gets lost. This is the end stage of Parkinson’s disease” 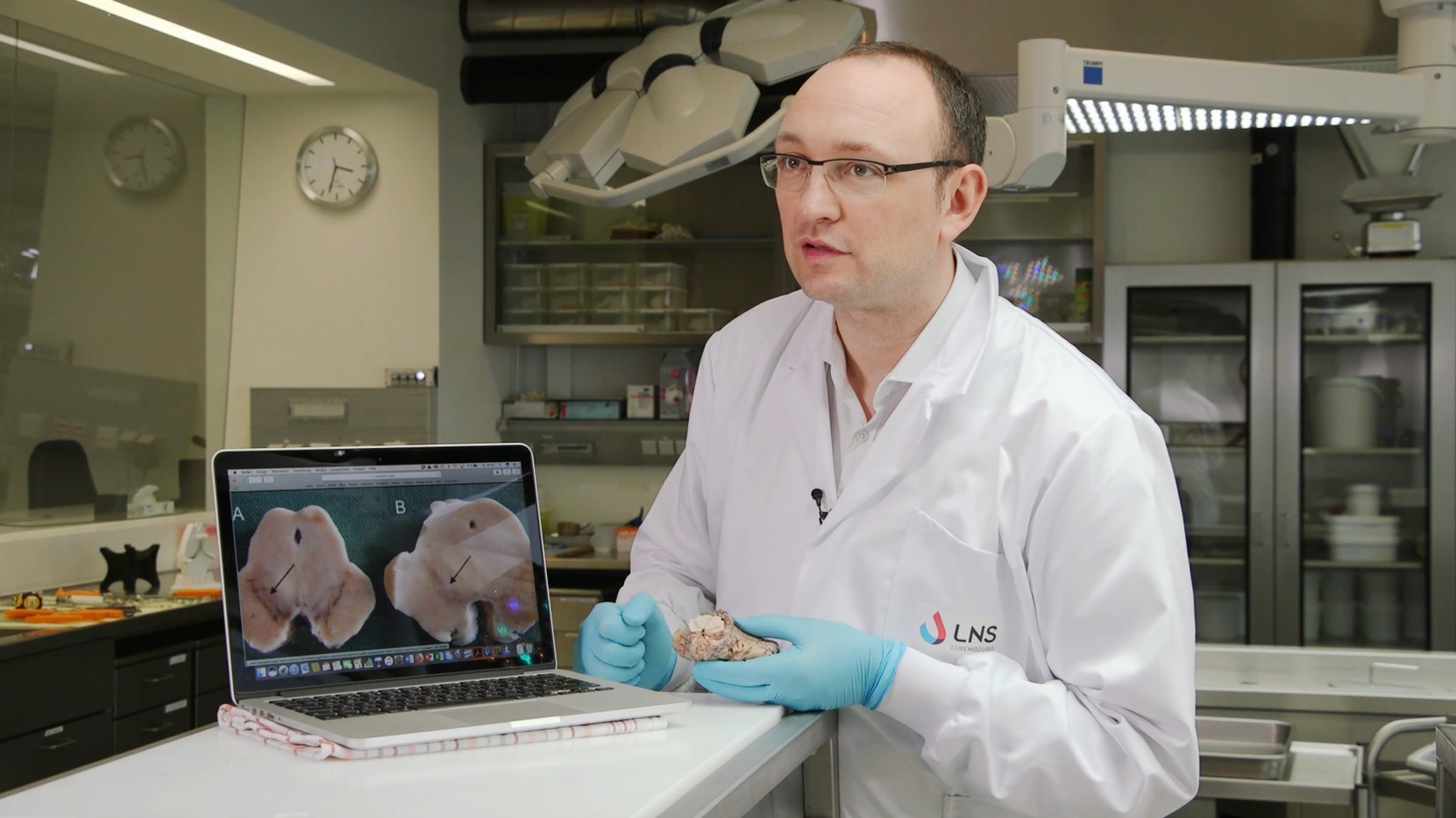 The brain is not only made of neurons – how do diseases affect other cells of the brain? Mittelbronn and his team are exploring this question in mouse models, using tissue samples from the brains of mice. Through studies like these, researchers have already shown that immune cells are also implicated in Parkinson’s disease.

“We think that they do additional harm to the brain. Our strategy now is to try to modify these immune cells to inhibit, or at least slow down these neurodegenerative disorders.”

In simple terms: At the LCSB, Mittelbronn’s focus is on Parkinson’s disease, at the LIH his focus is on malignant brain tumours. These research activities are connected via the Luxembourg Centre for Neuropathology and LNS Diagnostic Unit, with Mittelbronn at the head.

A brain bank in Luxembourg

What are the processes that decide whether a tumour will grow into a compact lump or will spread fine branches deep into the brain where it is near impossible to treat? How exactly do cancer cells from primary tumours spread through the bloodstream to form metastases in the brain?

The researchers can study such fundamental relationships in cell cultures in the laboratory – however, to corroborate basic research findings in neuroscience, human tissue specimens are essential: Therefore getting a brain bank up and running in Luxembourg is key to Mittelbronn’s research mission.

“Before, specimens were sent abroad. Luxembourg basically had a drain of all neurological specimens and this is a pity, because on one hand, you have really good basic research, really good clinical research or structures, but neuropathology was really the missing link.

“That’s why the Luxembourg research actors decided to establish this position and I think it was a very good decision, because now we have a lot of interaction with clinicians, basic researchers. My group is at the interface between diagnostics, research and teaching.”

Besides conducting research and developing better diagnostic methods, Mittelbronn feels the results of his work should provide an immediate benefit to patients. Patients can come to him directly for detailed consultations about their pathological diagnosis. His department also offers a telepathology service for all hospitals in Luxembourg.

Clear need for a specialist in neuropathology

Parkinson’s disease has long been a focus of research in Luxembourg – most notably under the umbrella of the National Centre for Excellence in Research into Parkinsons’s disease (NCER-PD), an 8-year research programme supported by the FNR with around 14 MEUR.

Based on the research activities of the LIH and LCSB, along with the current strategic development of the Laboratoire national de santé (LNS), a clear need for a specialist in neuropathology in Luxembourg was identified. Indeed, until the arrival of Prof Dr Michel Mittelbronn, neuropathology diagnostics were not covered by the LNS and despite strong, internationally recognised research expertise in the ‘Neuro’ field both the LIH and LCSB, clinical neuropathology was missing.

For these reasons of national and strategic needs within the biomedical sector in Luxembourg, the institutions proposed to launch a joint initiative for the recruitment of an FNR PEARL Chair in neuropathology back in 2016 which resulted in the appointment of Prof Dr Mittelbronn.

Mittelbronn bridges clinical diagnostics and research activities, helping foster the ties between the country’s major actors in biomedical research. Before joining the Luxembourg research landscape, Mittelbronn headed the diagnostic neuropathology at the Neurological Institute of the Goethe University Frankfurt/Main, the oldest brain research institute in Germany and among the largest neuropathological institutes in Europe.

His arrival has enabled the LNS morphological and molecular pathology department to provide services in the field of neuropathology, thus avoiding the transfer of specific analyses to foreign laboratories and shortening the result delays to clinicians and patients.

Find out more about Michel Mittelbronn’s research in our video below.

Before coming to Luxembourg, Prof Mittelbronn headed the diagnostic neuropathology at the Neurological Institute of the Goethe University Frankfurt/Main, the oldest brain research institute in Germany and among the largest neuropathological institutes in Europe.

Prof Mittelbronn studied human medicine and neurobiology at the University of Tübingen/Germany, before specialising in neuropathology. Prof. Mittelbronn is now also the head of the Department of Pathology at the LNS where also the clinico-diagnostic Unit for Neuropathology is located. He heads two research groups, one with a special focus on Parkinson’s disease at the LCSB and another with a focus on neurooncology at the LIH. 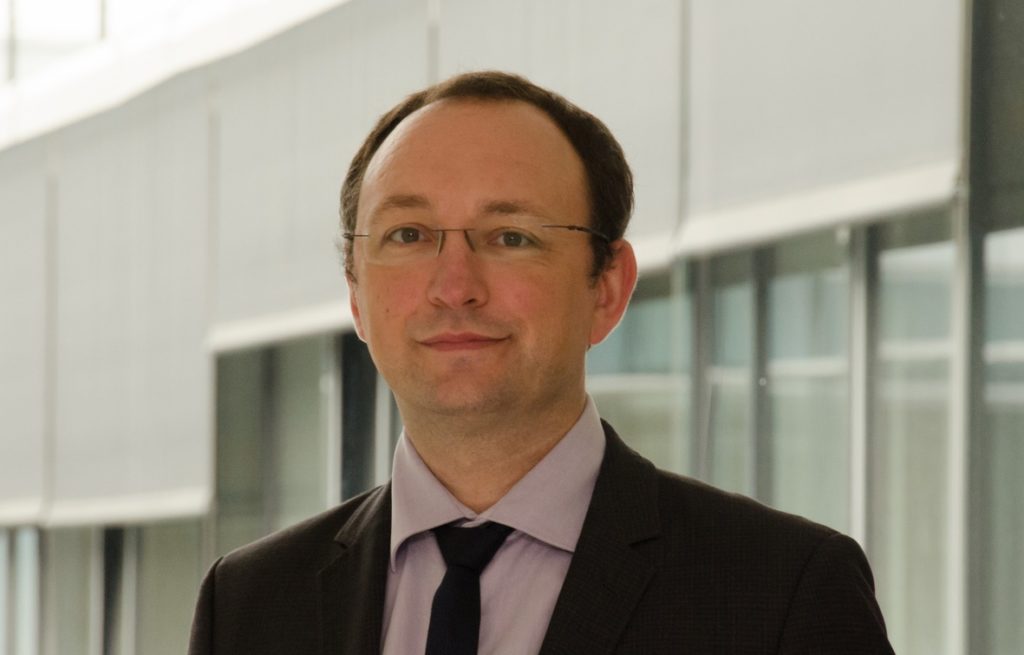